Read Kathleen’s essay, “Dickens and Lincoln,” which was featured on chicagotribune.com 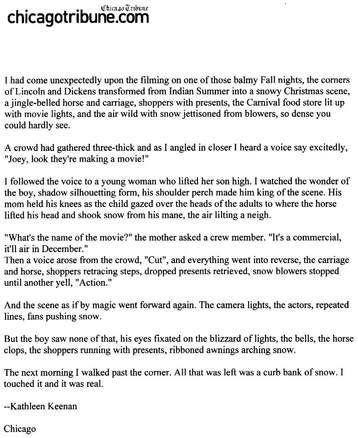 ​I had come unexpectedly upon the filming on one of those balmy Fall nights, the corners of Lincoln and Dickens transformed from Indian Summer into a snowy Christmas scene, a jingle-belled horse and carriage, shoppers with presents, the Carnival food store lit up with movie lights, and the air wild with snow jettisoned from blowers, so dense you could hardly see.A crowd had gathered three-thick and as I angled in closer I heard a voice say excitedly, “Joey, look they’re making a movie!”
I followed the voice to a young woman who lifted her son high. I watched the wonder of the boy, shadow silhouetting form, his shoulder perch made him king of the scene. His mom held his knees as the child gazed over the heads of the adults to where the horse lifted his head and shook snow from his mane, the air lilting a neigh.
“What the name of the movie?” the mother asked a crew member. “It’s a commercial, it’ll air in December.”
Then a voice arose from the crowd, “Cut,” and everything went into reverse, the carriage and horse, shoppers retracing steps, dropped presents retrieved, snow blowers stopped until another yell, “Action.”
And the scene, as if by magic, went forward again. The camera lights, the actors, repeated lines, fans pushing snow.
But the boy saw none of that, his eyes fixated on the blizzard of lights, the bells, the horse clops, the shoppers running with presents, ribboned awnings arching snow.
The next morning I walked past the corner. All that was left was a curb bank of snow. I touched it and it was real.
© Kathleen Keenan 2020
Use of images or text without written permission is prohibited.​